Lord Shiva is a Hindu deity and represents the aspect of the Supreme Being. The meaning of the Sanskrit word Shiva is 'pure and destroyer'. According to Hindu mythology.

Hayagriva Lakshmi Idol, Lord Hayagriva is an avatar of Lord Vishnu. Lord Hayagriva is depicted with human body, horse face wearing white garments and seated on white lotus. Hayagriva is praised as the lord of wisdom and deep knowledge. Haya implies “Horse” and Greeva means neck. He is believed to be the one who won ignorance and foolishness with his pure knowledge. People worship this Lord to be blessed with pure wisdom, intelligence and knowledge. His consort is Lakshmi.

Hayagriva is depicted with 4 armed, carrying a Conch & Wheel known as Shanka and chakra in His two hands, a rosary (aksha-mala) in the third and his fourth is in the vyakhya mudra. He is also found holding the vedas in some occasions. Hayagreeva is associated with the purity of knowledge and is represented in the same way as Saraswati. White is a symbolism of purity that is depicted in the “white horse” face he adorns.

Brahma is said to be the master of vedic knowledge and he had the Vedas with him. Once, when he was feeling sleepy, a demon called Ajnana stole the Vedas from Brahma. Then, Lord Vishnu took the form of Hayagriva and demolished the demon. He then returned the Vedas to Brahma, when he begged for them. Brahma is a trustworthy Lord and hence he offered the vedic knowledge to Hayagriva , when he asked them. Thus, Hayagriva remained as a protector of the Vedic knowledge. 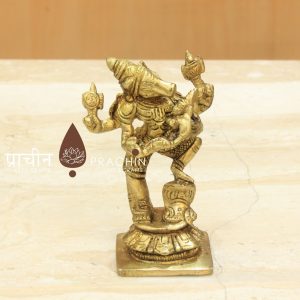