Bhairava is a fierce form of Shiva. It is believed that Bhairava is connected to the Mahavidya goddess named Bhairavi who gives Lagna shuddhi.

Bhairava Idol – Lord Kala Bhairava – is a fierce manifestation of Lord Shiva. He is depicted in an aggressive form with angry eyes shaped like lotus blossoms, blazing hair, tiger’s teeth, snake coiled around his neck or crown, and an eerie garland of human skulls. Often terrifying, Kala Bhairava carries a trident, a drum and the severed fifth head of Brahma. The deity is blue throated from swallowing poison to save the world. Hence, he is considered to be the vanquisher of death.

Lord Kala Bhairava is widely worshipped by tantriks and yogis to gain various siddhis. Bhairava is regarded as the protector and the kotwal. In astrology Lord Bhairava is the Lord of star (graha) Rahu so to attain the maximum benefits of rahu, people worships Lord Bhairava. Bhairava is a fierce form of Shiva. It is believed that Bhairava is connected to the Mahavidya goddess named Bhairavi who gives Lagna shuddhi (purification of the follower). This purifies and protects the body, chracter, personality and other qualities associated with the follower. Worship of Lord Bhairava is very useful to win over your enemies, success and all materialistic comforts. 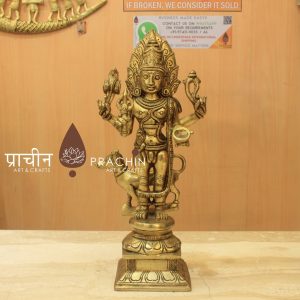