Goddess Durga is worshipped as the Goddess of Strength. Navratri, devotees worship the nine avatars of Maa Durga.

Who Is Lord Ganesha ?

Goddess Durga is worshipped as the Goddess of Strength. Navratri, devotees worship the nine avatars of Maa Durga. Her vaahan or vehicle is a Tiger or Lion. Tiger represents unlimited power while Lion represents beastly desires. Her riding on a lion depicts She has conquered all beastly desires. She is the force/ energy behind Kundalini, the dormant energy coiled like a serpent at the base of the spine of every human. The word “DURGA” Means Invincible & She is also considered to be the other half of Lord Shiva. Her 3 Eyes Signifies Surya, Chandra & Agni.

Be the first to review “Durga Standing With Lion” Cancel reply 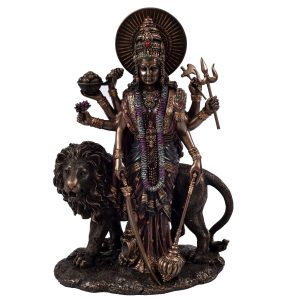