Saraswati, goddess of knowledge and the arts, embodies the wisdom of Devi.

Who Is Goddess Saraswathi ?

Saraswati, goddess of knowledge and the arts, embodies the wisdom of Devi. She is the river of consciousness that enlivens creation, she is the dawn goddess whose rays dispel the darkness of ignorance. Without her there is only chaos and confusion. To realize her one must go beyond the pleasures of the senses and rejoice in the serenity of the spirit. Goddess Saraswati is also known to guide the souls of the deceased to find peace in their afterlife. ‘Moksha”, as they say, is a part of the “divine knowledge” imparted by the goddess. Her four arms represent the various aspects of human personality — learning, mind, intellect, alertness and ego. These four arms are also known to reflect the 4 Vedas — Rigveda, Atharvaveda, Samveda and Yajurveda. 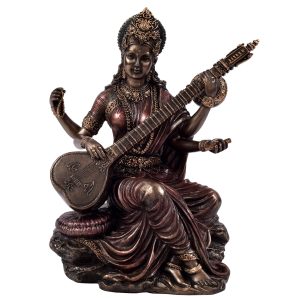