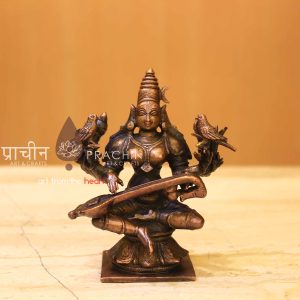 Garuda?is a large, mythical Eagle, which appears prominently in both Hindu and?Buddhist?mythology.? Incidentally, Garuda is also the?Hindu?name for the constellation Aquila. The Brahminy kite and Phoenix are considered to be the modern representations of Garuda. Garuda is the national symbol of Indonesia ? this mighty creature is depicted as a large Javanese eagle.

In Hinduism, Garuda is an Upadevata, a divine entity, and is depicted as the vahana or mount of Sri Maha?Vishnu. Garuda is usually portrayed as being a strong man; having a golden, glowing body; with a white face, red wings, and an eagle’s beak. He is adorned with a crown on his head.? This very ancient deity is believed to have a gigantic form, large enough to block out the?Surya Devata?or the Sun God.

Garuda is widely known to be a permanent and sworn enemy of the Nagas, the ones belonging to the serpent race – it is believed that Garuda fed only on snakes. This behavior bears reference to the short-toed Eagle, which can be found in India. The image of Garuda is often worn as a charm or amulet, as it is believed to protect the wearer from snake attacks and poison. In fact, Garuda Vidya is the mantra which is often used as a palliative measure to destroy the ill-effects of snake poison and also to remove all sorts of evil the victim has been afflicted with.