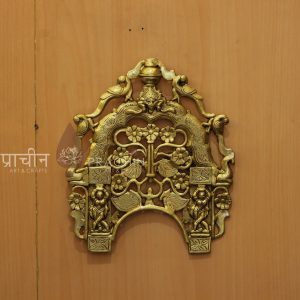 Gandaberunda, in India, traces its origin to the Puranas, where Lord Vishnu takes an incarnation. When Vishnu, as Narasimha, turns into a destroyer due to uncontrollable rage, following the execution of Hiranyakashipu, Shiva takes the form of Sharabha ? part-lion and part-elephant ? and tames Narasimha. Sharabha, enraged,?becomes destruction personified prompting?Vishnu to become?Gandaberunda and tame?Sharabha.

This two-headed mythological bird, thought to possess immense magical strength is believed to be capable of fighting the forces of destruction. The bird is generally depicted as clutching elephants in its talons and beaks, demonstrating its immense strength. In some cases it is shown holding a snake in its beak. while most depictions show a symmetrical image similar to the double-headed eagle some images show it with long tail feathers resembling a peacock.