Goddess Laxmi (Lakshmi) is the goddess of wealth, fortune, power, luxury, beauty, fertility, and auspiciousness. She holds the promise of material fulfillment and contentment. She bestows upon deserving people according to their past karma and degrees of devotion. She also protects from ill health and adversity.

Bronze Shiva Parvati Statue, Shiva is the god of the yogis, self-controlled and celibate, while at the same time a remarkable lover of his spouse. He is the destroyer, following Brahma the creator and Vishnu the preserver, after which Brahma again creates the world and so on. Shiva is responsible for change both in the form of death and destruction and in the positive sense of destroying the ego, the false identification.

Parvati means mountain as the Sanskrit word for “Parvati” is “Parvat”. Parvati, often incarnated as Kali and Durga. Parvati is the Hindu goddess of fertility, love and devotion, as well as of divine strength and power. She is the gentle and nurturing aspect of the Hindu goddess Shakti and one of the central deities of the Goddess-oriented Shakta sect. She is the mother goddess in Hinduism. 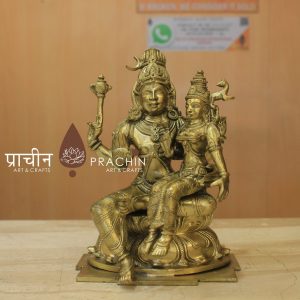