Cow and Calf With Gods

The cow is a symbol of the grace and abundance, Earth, the nourisher, the ever giving, undemanding provider. The cow represents life and the sustenance of life. Kamadhenu is also well known through its other five forms Nanda, Sunanda, Surabhi, Susheela and Sumana.

Brass Cow and Calf, All the gods are believed to reside in the body of Kamadhenu the divine cow. Her four legs are the scriptural Vedas; her horns are the triune gods Brahma (tip), Vishnu (middle) and Shiva (base); her eyes are the sun and moon gods, her shoulders the fire-god Agni and the wind-god Vayu and her legs the Himalayas.

Kamadhenu, the sacred cow which grants all wishes and desires, is an integral part of the entire Indian culture. This divine cow, which lives in heaven, emerged from the ocean of milk at the time of samudra-manthan (the great churning of the ocean by the gods and demons. It was presented to the seven sages by the Gods, and in course of time came into the possession of Sage Vasishta. 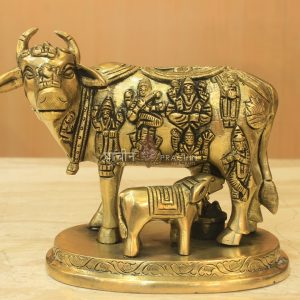 Cow and Calf With Gods