The Sun God is depicted as riding a chariot drawn by seven horses. These horses signify the seven chakras of the human body and the 7 colors of the rainbow. He carries a lotus (a symbol of life), a conch-shell, Chakra (discus), and Gadha (mace). Surya enjoys a higher rank than many other Gods as he has the power to nurture life on earth and to heal ailments. Surya is regarded as an eye of the Virata Purusha (The universal form or Supreme Being) by Hindus. Saints, humans, asuras, and rakshasas worship Surya, who is one of the five supreme Gods. 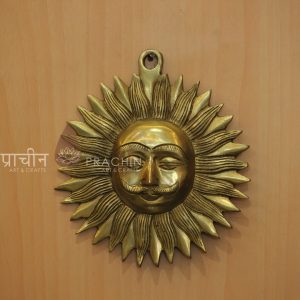