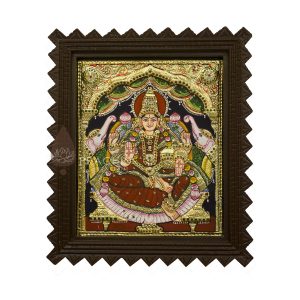 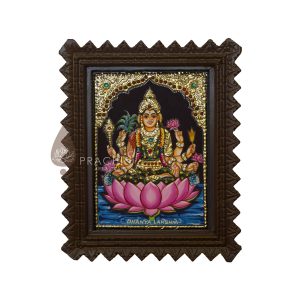 Adhi Laxmi or “Primeval Lakshmi,” also known as Maha Laxmi as the name suggests, a primeval form of Goddess Lakshmi. She is regarded as the daughter of sage Bhrigu and wife of Lord Vishnu.

Adhi Laxmi is often depicted as the consort of Narayana, living with him at his home in Vaikuntha, or sometimes seen sitting in his lap. Her serving of Lord Narayana is symbolic of her service to the entire universe. Adhi Laxmi is portrayed as four-armed, holding a lotus and a white flag in her two hands while the other two are in abhaya?mudra, in which the right hand is held upright, and the?varada?mudra, in which the right palm is held out with the fingers pointing down.

Laxmi (Lakshmi) is the goddess of wealth, fortune, power, luxury, beauty, fertility, and auspiciousness. She holds the promise of material fulfillment and contentment. She bestows upon deserving people according to their past karma and degrees of devotion. She also protects from ill health and adversity.

The Tanjore Art Flourished From Thanjavur, The Capital City of The Chola Dynasty, And Thus Got Its Name. Tanjore Painting of India Originated During The 16th Century, Under The Reign of The Cholas. Maratha Princes, Nayakas of Vijayanagara Dynasty, Rajus Communities of Tanjore & Trichi and Naidus of Madurai Patronized The Art of Tanjore Painting From 16 to 18th Centuries.

The Paintings Are Hung On Walls To Give It The Fulfillment With Its Richness & Vibrant Colors. The Shine and Glamour The Gold Leaves Used By The Tanjore Style Painting Last Forever Notable For Their Beautification In The Form of Semi-Precious Stones, Pearls, Glass Pieces & Gold.

Tanjore Painting Is Covered With 22 Karat Gold Leaves. Episodes From Hindu Purana and Religious Texts Were Visualized, Drawn and Painted With The Main Figure or Figure Placed In The Central Section of The Picture Mostly Within A Space Such As A Mantapa Surrounded By Several Subsidiary Figures, Themes & Subjects.

The Art Was Sacred Task To Be Performed With Ritual Purity and Humility By The Master Craftsmen, Many of Whom Choose To Remain Anonymous, Tanjore Paintings – The Style and Aesthetics Continue To Inspire Many Contemporary Artists.